The OnePlus 6 is just around the corner & we already know the specifications of the device. However, what we didn’t know is that what is the launch date for the OnePlus 6. However, that question just saw some ray of light with the recent rumor of OnePlus working on a “Avengers: Infinity War” special edition OnePlus 6.

The “Avengers: Infinity War” movie is coming out on 27th April, 2018 and if there is a Infinity War special edition OnePlus 6 then OnePlus may actually unveil the OnePlus 6 on the exact same day.

OnePlus did unveil a Star Wars special edition OnePlus 5T on the same day when the movie got released. So, if there is a Infinity Wars Edition OnePlus 6 this time we won’t be surprised.

The official confirmation was already there for the higher-end variant of the OnePlus 6 to have 8GB RAM and 256GB Internal Storage. If the Infinity War edition appears, this is the exact Memory configuration it’ll be available with. However, it may cost a little more compared to the regular 8GB, 256GB variant.

Anyway, as all the clues are leading to 27th April, that is probably the date when the OnePlus 6 will arrive. So, if you were waiting to pick one up, you probably don’t need to wait very long.

OnePlus 6T Will Launch This November 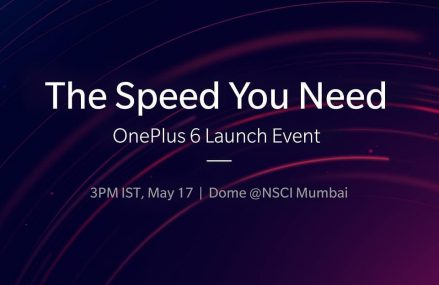 It’s Official: OnePlus 6 Is Launching In India On 17th May