The Razer Phone is great with top notch hardware including the Snapdragon 835, 8 Gigs of RAM, 128 Gigs of Internal Storage & most importantly that 120Hz IGZO panel. But, what’s not so good are the Cameras. So, after all the reviews are out, the Cameras are officially not so good. Now, Razer claims that the main culprit is the camera software & not the hardware so, they are working to improve it with Software Updates in near future…

The Razer CEO, Min-Liang Tan recently spoke out about this in a Facebook Post where he said,

“While the camera hardware and sensors are phenomenal, we are focused on improving the performance of the software – specifically the performance of the camera app in the near term. At this time, we are working to update features such as shutter speed, low light and many other optimizations to the current software. These fixes and optimizations will be progressively released over the next few weeks.”

So, it’s good to know that they actually have listened to the reviewers & working on concerned issues already. He also said that they’ll also be adding several features to the Camera app like a button to jump directly to the Telephoto Lens & 4X slow-motion video recording in the Nougat firmware & then they’ll also add things like Portrait Mode, 60 fps Video Recording in Q1 of 2018 alongside the Oreo update.

So, let’s see how well can Razer optimize their software to simply perform better at this point. Cause if they fail, that very good phone will still remain bottlenecked in a very important department. Maybe it’s built for gaming but, I guess no one likes a premium phone to have a not so premium Camera. Specially when there are so many other options available. So, best of luck Razer. 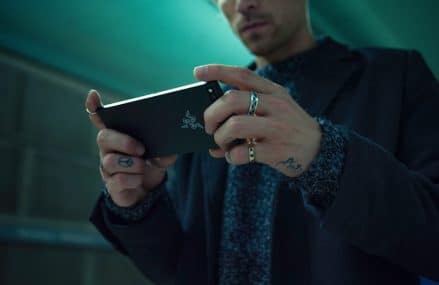 Razer Phone Got Leaked Ahead Of Launch Along With Specifications !